Will anyone be able to undercut Amazon pricing; in other words will Amazon be able to stop the Wheel of Retailing?

The concept is being debated by HBR in the original article below. I will shed my light on this very interesting discussion. Business and economical principles are like fashion, cyclical. Fashion today will almost certainly come back in 20-30 years after someone gives a new spin to “old-fashioned” or “classic” looks. Business used to have a similar cycle, “The Wheel of Retailing” where a new retail chain would lure in customers based on low prices. Over time, often under pressure from shareholders, the company must improve profit margins, i.e. improving the return on investment (ROI) for them.

To do so would mean increasing prices. However, customers are intelligent shoppers. When prices go up for one retail chain, they will go elsewhere, provided a) the product is available within an acceptable distance, b) the difference in price is worth the trip and c) the quality of the product is the same or better. Now if the product is not available anywhere else, the consumer will buy at the higher price level or stop buying the product altogether and find an alternative.

The Wheel of Retailing

When does the “Wheel of Retailing” commence? When a new retail store or chain opens its doors and sells the same products at a lower price. Until that retailer needs to increase their prices to improve profit margins and ROI’s for its stakeholders. This cycle happens locally, regionally, nationally and internationally, hence many products imported into the US come from low labor cost countries like China and Taiwan. Now that China and Taiwan are getting more expensive to the US consumer, partly driven by rising labor costs as well as transportation costs, import duties and currency impact, US consumers are slowly starting to buy American again and opportunities have increased for American entrepreneurs and small businesses.

The internet has changed the business model in many ways. To start with the internet as retail store (as well as B2B) is global by default. In the old days if you had a great product you needed layers of brokers and distributors and a whole lot of advertising to get in front of anyone. Now you put it online, on your own e-commerce site and Amazon and you can sell to the world.

Amazon’s mission is to sell everything to everyone. Will Amazon run up to the “Wheel of Retailing”? In my opinion, yes, but it will take a while before that happens. To start with the situation needs to occur where Amazon must increase their prices to improve return to shareholders. Due to the fact that Amazon keeps expanding exponentially fast, increasing sales and leveraging their infrastructure to improve their margins provides increasing returns to shareholders, maybe not through dividends but through rising share price. It must be said that (as per today’s date) without Amazon Web Services the company would have had an operating loss. So to put it simply I believe that Amazon will continue to offer the best prices, as long as they can offer the shareholders increased returns while they keep expanding into anything they can lay their hands on and trade.

And to make Amazon’s business model even more astounding, as off the publication date of this post Amazon has just opened their first retail stores. While one classic retail chain after another like, Sears, Borders, Circuit City and others are closing their stores. Go figure!

What do you think? Will Amazon stop the “Wheel of Retailing” and if yes, when? 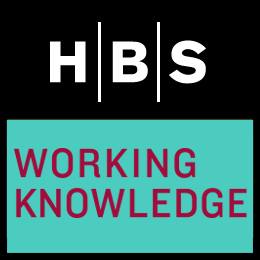 In 1997, a young entrepreneur visited a class at Harvard Business School taught by my colleague, Len Schlesinger. The class discussed a case based on the visitor’s fledgling online retailing company that had rapidly expanded sales to $100 million. The main issue of the case had to do with avenues for growth for the company; what would consumers want to purchase online that would fit into a rapid response distribution model? Students rejected numerous options involving lower-value items such as dog food, which would require expensive storage and transport costs.

At the end of the discussion, the visitor commended class members for the depth of their analysis—then chided them for their limited vision. Of course, the company was Amazon and the visitor was Jeff Bezos. And his own view for the company was nothing less “sell everything to everyone everywhere.” Including dog food. (Twenty years later another colleague relies on Amazon for delivery of dog food to a remote location in Maine at a price comparable to the local supermarket.)

There is no question that Bezos has built a retailing juggernaut, one that is capturing the largest share of market in product category after category. His success raises a question: Can Amazon successfully defy a notion—the wheel of retailing—that has been debated in retailing for nearly sixty years?

The wheel of retailing was first described by Malcolm McNair, a distinguished faculty member at HBS beginning in 1920 who, after completing work in Shakespeare and English, became fascinated with the retailing field. In 1958, he described what was happening in the world of retail after the Second World War.

He observed that new retailing concepts typically begin with low-price strategies with the goal of attracting customers. As the number of customers and the volume of sales increase, the retailer gains a dominant position in the market. The goal gradually shifts from attracting more customers to increasing prices and margins in order to achieve higher profits. That subjects retailers to new competition from low-priced, low-service startups, thus spinning the wheel of retailing again.

The concept fell out of favor with the ascendancy of big box retailers, especially Walmart. Walmart gained such a dominant share, driving so many higher-priced, higher-margin competitors out of business, that it was believed that the only limit on the company’s growth and profit was the size of the global retail market itself. No competitors could successfully undercut such a retail phenomenon. The wheel of retailing had been stopped!

Until, of course, the internet came along. Walmart was slow to react to online retailing, favoring its brick and mortar big box stores instead. Amazon, unburdened by such real estate, was easily able to mobilize Internet capabilities in order to capture a dominant share of a notoriously inefficient book retailing industry. It didn’t stop there. And now it is systematically moving into new product categories, including those served by Walmart.

Amazon’s success raises questions about the future of retailing. Is an “Amazon 2.0” even now in the early stages of design and introduction? Is the wheel of retailing any longer a valid or helpful concept?

Can Amazon do what Walmart couldn’t: stop the wheel of retailing? What do you think?

Does Age Matter in SEO?

The Value of Videos in Digital Marketing

Online Battle with Amazon – Can Walmart Catch Up?